So how do we know?
Are there rules? Yes, there are.
Are they difficult? Yes, some are!
Why? Because for many of the rules there are exceptions and some of those are longer than the rules.

So what do we do? Most textbooks just suggest that you always learn the vocabulary with the gender, e.g. don’t learn table = Tisch, but table = der Tisch.
Good idea – if you have time to learn vocabulary. Unfortunately, most adults are so busy with work and family life, there is no time left to learn long lists of vocabulary.
Is there anything worth doing? Yes, a few rules are worth remembering:

If those lists don’t help, then there is only one option left: when speaking to Germans, mumble your gender, so that they all sound like ‘de’. With a bit of luck they won’t notice ;-))

Question for the weekend: what is the English translation of der Band, die Band, das Band?

Edit 2017: If you like to know more about gender, I have created an online course just for that: German grammar – gender: is it der, die or das?

Edit 2020: If you don’t like online courses and rather read books, you can now also buy my book: German Gender – Is it der, die or das?

This post contains affiliate links to Amazon. It means I might get a few pence if you buy anything – at no extra cost to you. 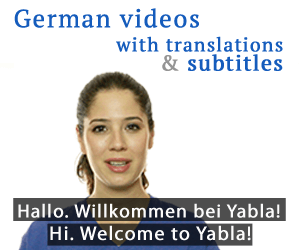